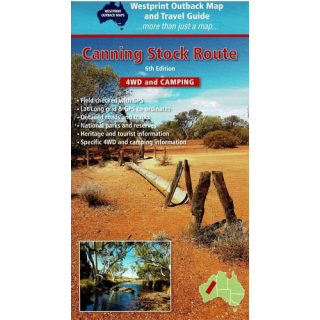 The Canning Stock Route is the longest and most remote stock route in the world. Detailed track information, traveller advice and historical information is included in this waterproof map.

Alfred Wernam Canning was born at Campbellfield, north of Melbourne, in 1860. He started work in New South Wales as a cadet surveyor and in 1893 joined the Western Australian Department of Lands and Survey. In 1901 he was given the task of surveying a route for the Rabbit Proof Fence. This survey of about 1800 kilometres from the southern coast to a point south of Broome took four years to complete and was one of the world's longest continuous surveys at that time.
In 1906 Canning was asked to survey a stock route from Wiluna to Halls Creek through 1500 kilometres of trackless desert. He worked almost continuously for the next four years surveying and building the stock route. At the age of 70 Canning was asked to supervise a well reconditioning partially completed by William Snell. Canning was 76 when he died in Perth in 1936.