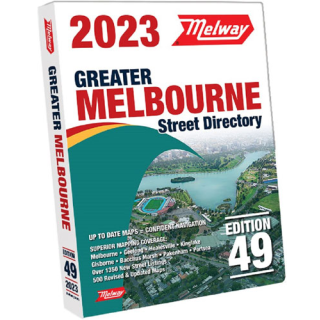 The most comprehensive street directory available of the Greater Melbourne area, has a coverage extending from Wandong, Wallan, Kalkallo, Whittlesea and Kinglake in the north to the Mornington Peninsula in the south, Warburton and Tynong in the east to Bacchus Marsh and Geelong in the west and south. Regional areas of Kilmore, Macedon, Gisborne, Riddells Creek, Bannockburn, Torquay, Anglesea, Lorne, Phillip Island and Koo Wee Rup are included. Completely updated with the addition of over 1350 new street listings.Also included is the most comprehensive public transport routes information with detailed train, tram and bus routes as well as walking and bicycle tracks. Country touring maps, extending as far west as Adelaide and north as far as Sydney, will help you on your way when planning trips out of Melbourne.