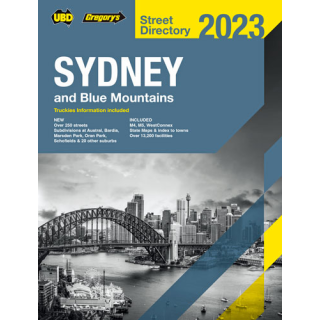 This Sydney Street Directory offers clear, comprehensive mapping at the best scale of Sydney and its surrounding suburbs with a separate section for the Upper Blue Mountains.

Included are an easy to read street indexes with over 56,300 street listings, suburbs listings including postcodes, and over 13,500 facilities listed. Also included are CBD maps at a scale of 1:5,000 and an index to buildings for these maps, maps and a list of Sydney & Parramatta CBD building numbers, a list of bridge clearance heights, Sydney international and domestic airport terminal maps, Moore Park and Sydney Olympic Park maps, main road maps and state mapping with an index to towns.