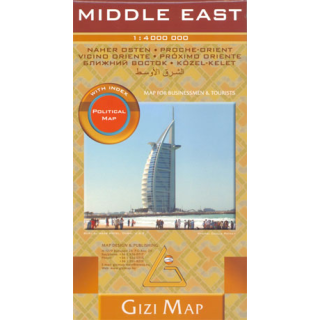 Political road map of the Middle East from Gizi Maps with administrative subdivisions of the countries and large amount of topographic information. Coverage extends from Turkey and Egypt to Pakistan and parts of Central Asia. An enlargement covers Israel and the adjoining areas of the neighbouring countries at 1:2,000,000.  All place names, are in Latin alphabet, with names of selected larger towns also shown in Arabic or Hebrew scripts. Most countries include boundaries and names of their administrative provinces.

The map shows road and rail networks and sea routes, and includes topographic information with plenty of names of deserts, mountain chains, water wells, coral reefs, etc. Numerous places of interest are highlighted, including UNESCO World Heritage sites, archaeological remains and national parks. Latitude and longitude lines are drawn at intervals of 2°. Extensive index, placed on the reverse side, lists all locations by country.